ALAMODOME, March 13, 2022  - Basketball fans around Texas had  yet to come down  Saturday morning  from  Clourd 9  performances by  1A Graford's  point guards (see below)  when along came  2A Clarendon's LaMarcus Penigar to send fans to new highs. 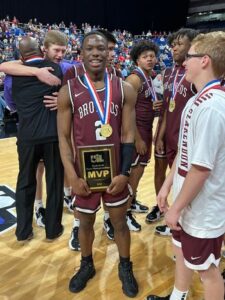 As though to say "one is enough," Penigar took charge of the Broncos battle with Lipan in the third quarter and continued on his scoring spree until he had  41 points in Clarendon's repeat title win over Lipan, 65-51.  Penigar's feat was the first 40 + performance  in his class in a state tournament since 1964.

Penigar hit six 3-pointers (five in the third) on his way to the 41,  to which he added 8 rebounds and three assists for the game.

Lipan's high hopes of a 40-0 perfect season were  shot down by Penigar and his teammates,  who hit 51% of their shots from the floor.

One cannot rightfully make the claim that any  two ball handlers are the very best, over and above , that is,  any other two on any other team in a state basketball tournament.

But one can honestly opine that there is not any duo any better than a pair on one team.

For Graford, that duo would  be seniors Marc Matthews  and Teagan Ford.  What a joy to watch them execute their exceptional  skills!

Matthews  was named the final's  MVP .

Graford started well and had a seven point lead at half time, 23-16.  But Texline came back to be up by two, 33-31, as quarter three closed out.

3 thoughts on “Point Guards Dazzle in 1A and 2A Finals”

2A Softball in Sweet 16 Regional Battles