Shiner lost key members from its 2021 state championship team in T&F, but with the Brooks brothers still competing, the Comanches have at least an outside chance at repeating for the team title.

But Refugio, Stamford, New Deal and a couple of other strong teams likely see things differently.  Refugio and Stamford are particularly strong in the relays, and Ernest Campell is expected to defend his first place 2021 finish in the 100 meter dash, but will be pushed by Hawley's Teagan Knight. 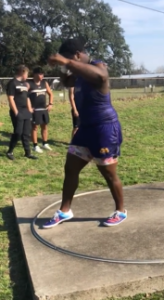 The monster from Shiner, senior Doug Brooks, should be in Austin for the shot put and brother Dalton, a junior, has a good shot in the hop step and jump.  Petrolia's Quade West's best shot, 53'9" is almost a foot beter than Doug Brooks' 52'11".

Noah Haileab of Perland Dawson appears to have a lock on both the 1600 and the 3200 meter runs.  Noah's times are considerably better than the times of others from around the state who compete in these  events.