When Chaparrral star Jaden Greathouse (#23) fouled out with 1:56 left in regulation and his team trailing by one,  52-53, the biggest moan ever arose  from his  fans in the Alamodome, a moan deeply felt, if not heard, all the way to the Western hills of Austin and very likely,  beyond. 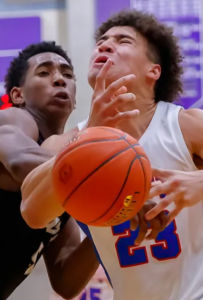 With Greathouse's exit, the Chaparrals' hopes of advancing to Saturday's  6A final seemed dashed.  He had played superbly, and roughly, while scoring 19 points, the most by a Chaparral.

But  Greathouse's teammates rallied  and were  leading 54-53 with 1.9 seconds left in regulation and McKinney set to inbound .  Technical on Weslake,  new Chapparel sub #50 was wearing #55, a no-no in this state tournament.   One of two frees made: 54-54 sent the contest into its first OT, which ended 64-64.

The  second overtime moved sluggishly and was tied at 66-66 with but 9.4 seconds left on the clock when Alex Anamekwe, McKinney's 6'5" forward, stole the ball, drove for the basket and slammed dunked fo rthe win, 68-66.

Alas, Westlake's consolation is only partial, but hopeful.  Among the nine seniors on its  26 member roster, Jaden Greathouse  is not one of them.  He will return for his senior season, with a chance at redemption, provided, that is, he has chosen not to switch to football, for which he is obviously as equally talented.

Why Wait? Let’s Jump to the Semifinals in 2A1/2

The Greatest Power in the Chrisitan Faith, the Ability to Grow