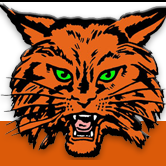 August 15, 2022 - For perhaps the first time in their storied gridiron history, the Refugio Bobcats will begin a season against a recent state champion.

On June 24, 2022, in College Station,  the Hitchcock Bulldogs defeated Lorena, 33-6, for the Division II state “7 on 7” title.  The Bobcats and the Bulldogs square off on August 26th in Hitchcock.

Hitchcock has been highly competitive under HC Craig Smith, who is entering his 11th season at the head of the Bulldog turf program.

For 2021 the Bulldogs were 5-6, playing in an extremely tough district in which competition they lost to Columbus, Yoakum, and Hallettsville, but won soundly over Hempstead and Boling.   In the 2021 bi-district playoff round, the Bulldogs were eliminated by Lorena, 53-28, the eventual 3A1 champion.

Lloyd “Chubby” Jones played most of 2022 at wide receiver and defensive back, earning first-team All-District plaudits.  He switched to quarterback for last year's final four games.

Texosport does not know exactly why Lloyd’s nickname is “Chubby,” since he stands 6’3” in height while carrying 185 lbs.  Whatever the reason for the misleading tag, there is no doubt, Lloyd Jones and his teammates will give the Bobcats stiff competition on August 26th. 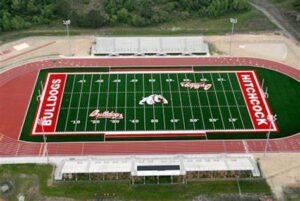 From Refugio, the best drive is to go to Victoria and take Hwy 59 north to Sugar Land, where you turn right on Hwy 6 to Hitchcock.  (You can also take 35 to Sweeny and turn toward Hitchcock, to the northeast.)

6 thoughts on “Bobcats Open 2022 Season Against A Formidable Opponent”