After Carol's birth, John R. and Dodie Walker  moved with her to Tivoli, TX, in Refugio County, where John R.  Walker was employed by the Rutherford Oil Co.   Residing in a small frame house in Tivoli, the Walkers survived the hurricane of 1942.  Thereafter, they moved into the town of Refugio, where Carol began  her schooling in 1943.

Andrew and Carol first met the next year, when the Pates moved to Refugio to operate Pate’s Grocery, a business (Carpenter's) Andrew Sr. had purchased  from Mrs. Pate’s oldest brother, Roy Carpenter.  Previously, Andrew Pate Sr. was a long-time employee of the Humble Oil & Refining Company.  Both he and Mrs. Pate were graduates of Humble High School. 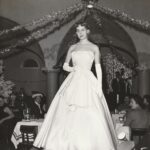 Carol Walker attended the Refugio schools through her graduation from Refugio High in 1955.  In the fall of 1954, she was the first Homecoming Queen to be elected by the student body, the same year she was selected “sweetheart’ of the RHS football team. In subsequent years, Carol was widely recognized for her being about Refugio County in a Jaguar sports vehicle, a gift to her from the Rutherford family.

Carol loved her children dearly and family togetherness was foremost among her values, along with her devotion to her Presbyterian faith and to helping organizations that serve the needs of the seriously ill and the poor.  Among those who knew her best, Carol  is best remembered for her beautiful smile, quiet demeanor and as an exceptionally fine decorator who also was gifted in her ability to grow beautiful plants and maintain a welcoming home.

During their 20 plus years in Refugio, the John R. Walker family was active in the First Presbyterian Church and Mr. Walker served several years on the board of the Refugio Independent School District, during which he was an everyday supervisor of the construction of the Jack Sportsman Football stadium, which opened in the fall of 1955.  In his later years. John R. Walker continued as a Rutherford executive.

After high school, Carol attended Texas A&M Kingsville for a year, then completed business school in Corpus Christi.  In 1961, she married banker Pete Larson of Victoria and El Campo, whom she had met in Kingsville.  The birth of John Larson in 1962 was followed by that of sister Jill and brother Jack.  The young Larson family lived in Victoria for several years, then Corpus Christi before settling in Rockport, where Pete Larson owned and operated a construction business.

Divorcees both, Carol and Andrew were married on August 2, 1997, in the parlor of the First Presbyterian Church of San Antonio, by the Reverend. Louis Zbinden.  They moved to College Station in May of 1998, into the home where Carol lived until her passing in a hospice home.

On May 30, 2021,  Carols’ son John of Ingram/Kerrville, Tx, died following a year’s long battle with pancreatic cancer.  In February of 2022 Carol was diagnosed with the same illness.  Also, preceding her in death were her parents, brother Bob Walker of San Antonio and step-son A. Lidden Pate, III.

Carol is survived by her husband, Andrew “Andy” Pate, Jr, a 1952 graduate of Refugio High, by her son Jack (Sarah, Harley, Remy) Larson and families of Rockport and Orange Grove and by daughter Jill  (Mrs. J. D.) Von Dohlen and family of Goliad, by her brother Jeff  (Mary)  Walker of Granbury, and by brother Clark Walker of Victoria, by grandson Robert Larson of Ingram, grandson Emory Larson of Magnolia and granddaughter Avery Larson of April Sound and Houston, by grandson Jeremy Ball of Austin, by grandson Hunter Larson of Houston, by grandson John Deere Larson of the U.S. Navy,  by nephew Rex (Jennifer) Walker and family of Round Rock, by niece Claire Walker and family of Wichita Falls and nephew Laird Walker of Dallas, by Anna Traweek Walker (Bob's wife) and family, by Bob's southeast Texas children and their families ,  by step-twin daughters Gale Marie Pate and Lokey Mooney of south Florida, and  also by several step-grandchildren and a  step great-granddaughter.

A memorial service for Carol Pate will be held tentatively set for 2:00 p.m, Sept. 24, 2022, in the First Presbyterian Church of Bryan. Persons wishing to make donations in her memory are asked to make them to the church of their choice or to an organization supporting cancer research.