We’d not be surprised if he ends up performing on stage.  Refugio’s Jordan Kelley is that talented.  He has run, tackled, passed and  received on the gridiron well enough to earn first-team All State honors in Texas 2AD1, 2021-22.

The Refugio athlete has signed to continue in football for Columbia Univesity in New York City, as a wide receiver. 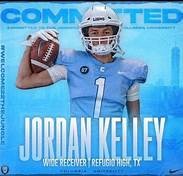 We do not know how many Texas 2A players have moved on to the Ivy League.  But we do know that Jordan Kelley will likely be the first to do so for Refugio High, which has had many of its grads continue in college athletics.

Currently, Jordan  is performing in basketball for the Bobcats (14-4) and will close out, by June 2022,  his brilliant high school athletic career on the baseball team, and, if needed, in track and field competition.

As expected for a future Ivy Leaguer, Jordan carries with him a 4.0 grade point average and, no doubt, solid test scores.

In a recent interview the young man  indicated that his final decision came down to a choice between Columbia and Angelo State, where he felt very much at home on his visit.

But Jordan took a long-range view of his

future and decided Columbia would be the right choice.  He will miss Refugio, he has said, and is well aware that there’s probably not a Whataburger near his new campus.

Jordan’s brother, Jared, left Refugio in 2020 to play baseball for the Chicago White Sox, which suggests another motive for Jordan’s college decision.  He’s much more likely to see his brother perform in the Big Apple than in San Angelo.